2016 may well turn out to be the year of the unexpected. In 2014, I planned 2015 to within an inch of my life, job, and friends. The lesson being that life happens no matter what your plans and the road may well lead to paths that were not intended. Which goes to show that as much as we humans like to believe we are in control, there is something else at work.

Come December 2015 there was not a plan in sight. There were visitors coming for Christmas, a vague plan for the day and no idea what was happening after that.

Many people may not be aware of the role that festivals play in bringing communities together through both the music and the financial contributions they make to the areas where they are held. The Falls Festival is one of the festivals that contribute to the local area.

The contribution is not only through the revenue raised by having the festival; it is also in donations to local community groups. In appreciation of the community hosting the Falls Festival $1 from every ticket sold goes towards local community projects that benefit the residents in local towns. Some other local beneficiaries have been Byron Community Centre, Brunswick Visitors Centre, and Crabbes Creek Community Hall. In total $340,000 has been donated to the regions that the Falls Festival is held in.

Pottsville Beach Neighbourhood Centre has been a recipient in the past and this year they were granted 10 passes for volunteers to attend the festival.

Then there is the unexpected.  My involvement with the Pottsville Neighbourhood Centre (PBNC) has been sporadic over several years – mainly assisting with funding applications to support programs for seniors and healthy ageing and developing promotional materials for their vibrant community arts, crafts and produce markets. When I first met the  Coordinator, Angela, in 2004, I was drawn to her energy, motivation, and clear sense of what the PBNC could be. It was exciting, inspirational and PBNC is now the vibrant hub of it’s community. The centre received the Tweed Shire Access and Inclusion Award  for its work and community involvement in December 2015. The idea that our contribution to the centre would be recognised, by being the recipients of tickets to the festival, was very humbling and greatly appreciated as attending this festival has been a bit of a dream.

The lineup was exceptional with a many bands that I had vaguely heard of and some well know ‘veteran’ performers. Paul Kelly and the Merri Souls and Gary Clarke Jnr were going to be a highlight; the art elements of the festival would be intriguing, and the younger acts would be interesting to see. The age of the crowd was a concern as we were well past our prime festival days and the Falls is billed as an 18 -35 event.

An article on The ABC had the Festival Director, Brandon Saul, describing the crowd as ‘disappointingly well behaved’. Late night drums were nowhere to be heard, loud partying in the campground, was not evident. One person yelled at a group of loud talkers, to keep quiet (ok they said shut up) and they did so immediately – and it was only 12mn. Behaviour that is unheard of at most other events.

That is not to say that the crowd were dull, the festival boring or the sense of fun was in any way diminished. The vibe was positive, happy, and exuberant. We did not see any evidence of negative behaviour or attitudes anywhere.

The crowd welcomed their ‘mum and dad’ commenting that they were glad we came and asked us for advice. In an effort to shock ‘the olds’, we were offered all kinds of things with very strange names, which we politely declined (and later looked up on Google – ha ha). When we sat down, people would join us and show genuine interest and curiosity about what we were doing at the Falls. Having cameras also helped to ease the initial discomfort.

The Arts Village provided entertainment outside of the music and a great cooling chill zone. There was always a buzz with the Artistic Director, Jodee Mundy, continually on the search for volunteers to be included in the street parade on Sunday. Here music rehearsal was happening, masks, and gigantic animals being created as crowds cued for the 15 minute stand up comedy acts. Lola’s Bar provided some folk acts for the festival including The Button Collective – a local favourite.

The inclusion of a wedding in the Petite Theatre also added a romance to the festival – and a link back to the unexpected as the celebrant was a member of the local Pottsville community, who happened to be on hand to assist with the nuptials (the legalities will be attended later).

The rings were made at the festival, the dress found hanging on a fence, and a spontaneous decision to get married was made  at the festival and brought together the entire Village to create a very memorable experience. The couple also participated in the street parade to celebrate. 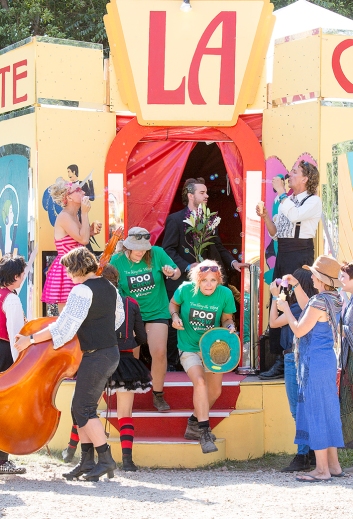 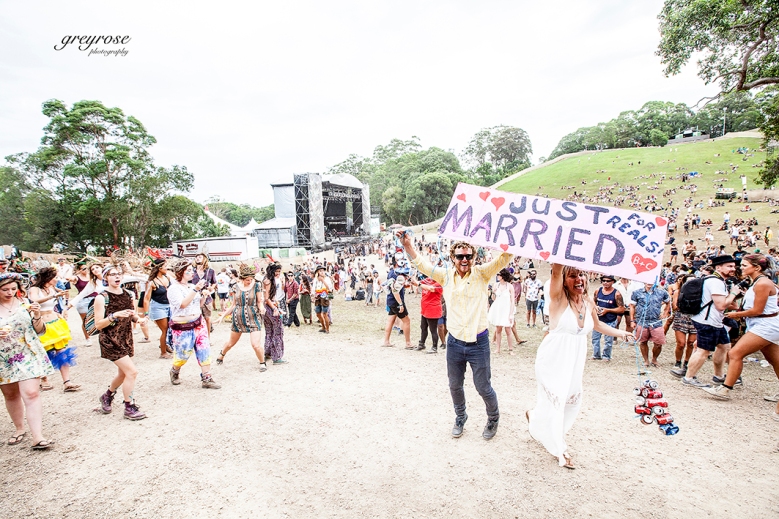 Favourite festival song had to be Dumb Things by Paul Kelly and the Merri Makers, because you have to acknowledge the legend, followed very quickly by Parlez Vous Francais by Art Vs Science.

The moment of awe was when we were walking past the Merch Tent on our usual lap of the site and found the Merri Makers signing. Paul Kelly gives a lot of magic to people but I have rarely seen him giving autographs. People weren’t pushing or shoving by this stage, however, one girl was obviously overwhelmed, and I nearly missed my opportunity to have the collection signed by consoling her. I did miss the opportunity to talk to him.

Talking to Vika Bull about here ‘At Last’ project was fantastic and being in the presence of Dan Sultan will always thrill me.

Outside of the music there were a lot of activities such as Palm Springs – a water park with slides, misting tents, giant games, and a life-size foosball area.

We left the festival with a new sense of hope, hearts full of joy and gratitude and a lot of new music to add to our collection.Many thanks to the Pottsville Neighbourhood Centre and the Falls Festival for this fantastic opportunity. 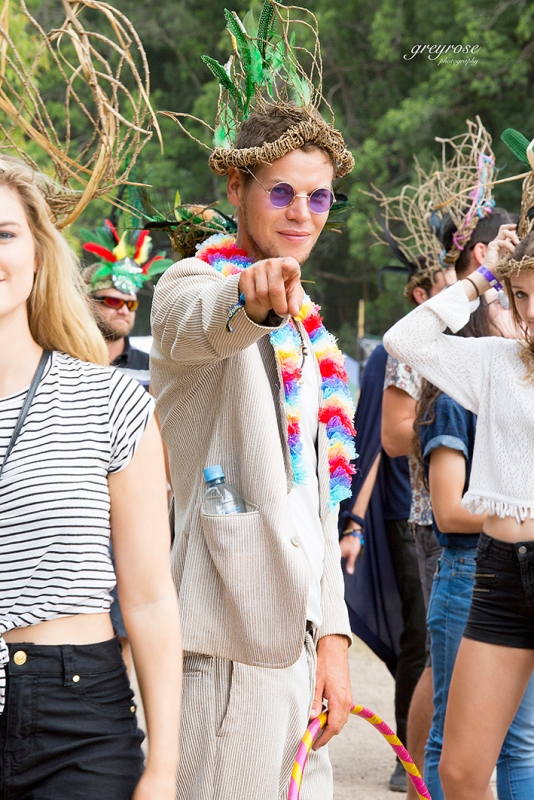